In the microsoldering community, Amtech NC-559 Flux is the gold standard.  You can buy the flux on ebay or amazon or aliexpress, but be warned that almost all of them are fake.  And yes, the fake flux is nowhere near as good as the real stuff.  So, how can you tell the difference between real and fake Amtech NC-559 flux?

Here are some pictures: 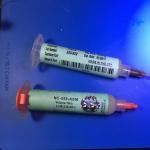 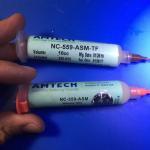 Real amtech nc-559 is more clear than the fake stuff

I bought the fake stuff from ebay for like $3 or something like that for a 10cc tube.  The real stuff, I bought from microsolderingsupply.com for $14.

I actually hit up Amtech to see if I can buy a tube from them and they told me that they only do bulk orders, so I got a quote from them for the 10cc tube.  Their minimum order is 20 tubes at $9/each for a total of $180 with shipping included and a 7 day lead time.

Since we’re microsoldering, one 10cc tube will probably last us quite a good while, so 20 tubes would be a little ridiculous.  Probably better to just buy one tube…a real tube, not the fake stuff.  From what I’ve read, the fake stuff is Kingbo flux repackaged as Amtech.  I can say for certainty that the fake stuff is nowhere close to the real stuff.  The fake stuff turns brown and gooey after heating.  The real stuff flows nicely and doesn’t turn brown unless heated for a long long time.