The iPhone 7 and iPhone 7+ have been plagued by a slow boot problem, usually after a screen repair. There are a list of culprits that could cause this problem. It seems as though after the iOS 11 update, the software checks all of the major hardware on the iPhone and if there is a problem detected, then the phone goes into a very sluggish state, taking forever to boot and when it does boot up to the home screen, the phone sometimes freezes.

We’ve seen a lot of these lately. The usual culprits are:

I’ll go into a little more detail about these problems.

Original front camera flexes for the iphone 7 and 7+ are hard to come by.  Unfortunately, there are have been cheaper aftermarket flexes that, when used, result in loss of audio or slow boot problems.  The best thing to do is to always try a known good (original) front camera flex along with a new screen to rule out the front camera flex as being the problem to the slow boot.

Sometimes a torn original front camera flex causes the slow boot as well.  So, as a screen repair shop, you should have a fully assembled known good working screen along with all of the small parts (except for the home button, which will need to be transferred) already on it.

As you can see here, there is an aftermarket non-original front camera flex here, which is the cause of the slow boot/no audio problem

Torn or Ripped Home Button Flex or U10 Chip

Also, if the original home button is not connected to the logic board, then the phone will also be slow to boot.  To fix all of these problems, we can replaced the U10 “Turtle” chip through microsoldering and run traces for the torn home button flex.  If the flex is completely ripped, then there is no way to fix all of the torn traces.  To prevent this problem, just lift the screen from the bottom right side of the screen or use a plastic pry tool.

The wifi flex is located at the top of the logic board and housing.  What we’ve seen happen is that when the front camera flex holding plate is unscrewed from the logic board, the screwdriver slips and either cracks the wifi chip or damages the flex.  When this happens, the wifi flex can be reconnected to the logic board, but the phone will be slow to boot and after bootup, the screen sometimes freezes.  The fix is to visually inspect the wifi flex and replace, if necessary.

We coined the term “audio ic disease” as a play off of the dreaded “touch ic disease” affecting the iphone 6/6+.  Similar to touch ic disease, audio ic disease is when one of the traces under the audio ic disconnects from the logic board, either through corrosion or bending.  There is really no way to determine whether the C12 pad has actually disconnected from the logic board, so the best way to determine whether this is the problem is to open up the voice memos app and see if the red record button is grayed out or not.  Just make sure that you rule out the front camera flex first.  If the front camera flex is ruled out, then the most likely problem is audio ic disease.  The fix is to replace or reball the audio ic chip and run a micro-jumper to the c12 pad. 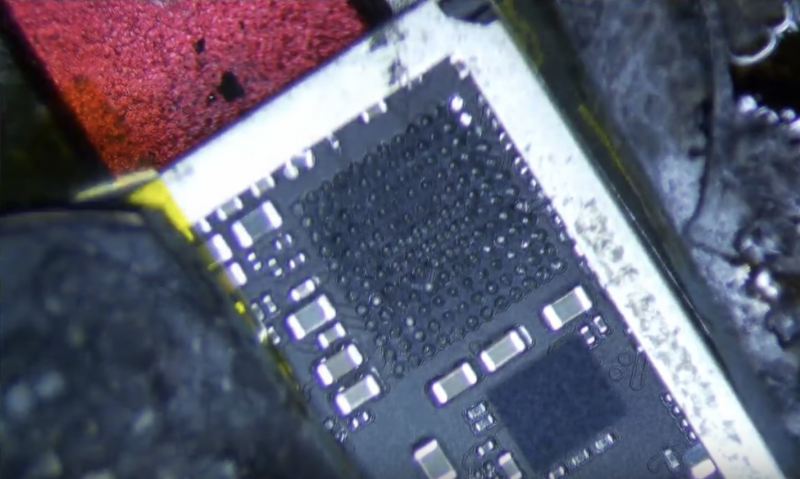 The c12 pad is third down from the right side. If you look closely, you can see some oxidation after the chip is removed.

We’ve been seeing a lot more of these lately.  Most notably in the A1660 model of the iPhone 7, which is the CDMA version.  This problem doesn’t usually cause the slow boot or freezing, but more often a “searching/no service” cell signal issue and/or an error 4013 upon update or restore.  Usually the phone is unusable after a failed restore.  As a matter of fact, Apple has just issued a free replacement if this happens to your phone.  We’ve determined that one of the problems is a short in the baseband chip itself.  We’ve also seen a short around the baseband PMU IC, which handles the power to the baseband chip.  Sometimes this problem is repairable, sometimes it’s not.  There’s really no way to tell aside from opening the phone and using a multimeter to locate the problem.

The pp_1v0_smps5 power line is often a culprit in cell service issues. Unfortunately, the short is within the baseband chip itself, which is not replacable 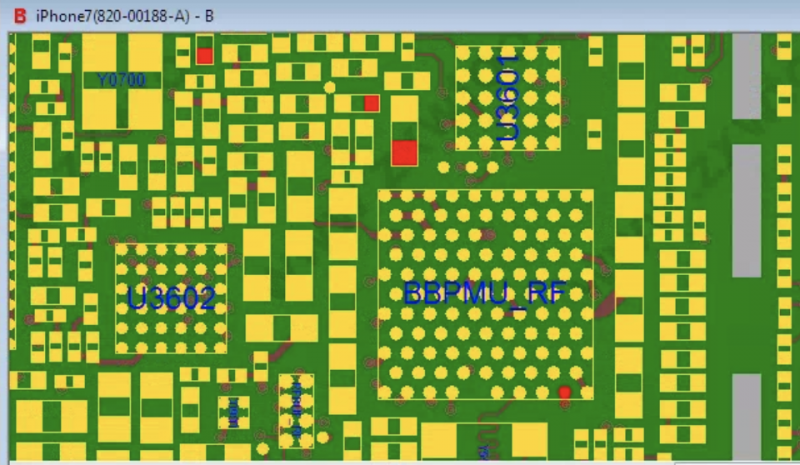 Here is a video of us diagnosing and repairing the slow boot, freezing, hanging, no audio problem in the iphone 7.